This episode was previously scheduled to premiere on Canada's Treehouse TV channel on May 27, 2017[1]but was updated as of May 25 to a rerun of Celestial Advice.[2]

This episode aired on June 20, 2017 on Boomerang in Australia,[3]forty-six days ahead of its scheduled premiere on Discovery Family. 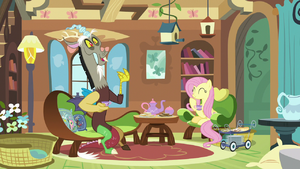 A tea party between close friends.

The episode begins at Fluttershy's cottage during Fluttershy and Discord's weekly tea party, with Discord supplying his usual signature brand of chaos to the mix. When Fluttershy mentions having to restock on sugarcubes, Discord realizes how much effort she puts into organizing their weekly get-togethers. Feeling like he has taken advantage of Fluttershy's hospitality enough, Discord offers to throw their next tea party in his home realm of Chaosville the very next day.

Fluttershy is not only looking forward to Discord's tea party but also to visiting his home for the first time, and Discord, realizing he has never hosted a party before, leaves to make appropriate preparations. In Ponyville, he has a conversation with a duplicate of himself about how to make the best tea party that Fluttershy has ever had.

From chaos to order 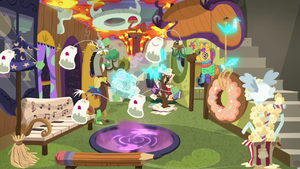 Is there such a thing as too much chaos?

Discord goes to Fluttershy's usual tea shop and, upon seeing the boring teas that the shopkeeper is selling, buys some bags of ginseng and uses his magic to make them sing. At a china shop, he buys a tea set for two and uses his magic to make the teapot sprout wings. Finally, at a party store, he buys a sneezing piñata and glowing, flying napkins. During his party shopping, Discord runs into Pinkie Pie and asks for her advice on how to make the ideal tea party for Fluttershy. Pinkie tells him to simply make Fluttershy feel comfortable.

Upon returning to his home in Chaosville, Discord realizes that the chaos around his house would make Fluttershy uncomfortable. With the help of several duplicates of himself, Discord sets out to create an environment that Fluttershy would like. First, he gets rid of all the new party supplies that he bought in Ponyville. Next, he gets rid with the various chaotic elements already in his house, such as chairs that hang from the ceiling and staircases that don't lead anywhere. 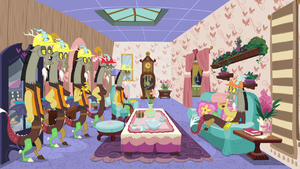 This is more Fluttershy's speed.

Huh. Quite strange. For the first time in my life, I don't feel quite strange. In fact, I feel... completely normal. 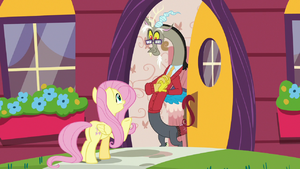 When the time for their scheduled tea party arrives, Discord transports Fluttershy to his realm, and Fluttershy is excited to finally see where he lives. However, she is surprised by how normal Discord and everything around him looks. Without the usual chaos that Fluttershy has come to expect from Discord, she appears considerably disappointed. She asks Discord about the drastic changes he has made to himself, but Discord assures her that he feels perfectly normal.

When Discord picks up the tea kettle, however, it suddenly phases through his hand and falls on the floor. Much to Fluttershy's shock, he is starting to fade out of existence. Each time Discord exhibits "normal" behavior, he fades away even further, and Fluttershy realizes that his new, non-chaotic persona is slowly destroying him. Unfortunately, Discord is unfazed by this development and continues to act normal, despite the effect it is having on him. 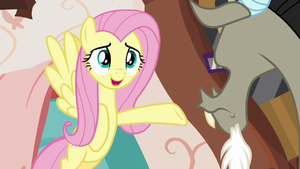 In an effort to stop Discord from fading, Fluttershy begs him to do something chaotic, but his ghostlike appearance prevents him from doing so. Therefore, Fluttershy starts causing her own chaos around Discord's house—knocking over teacups, talking to her own reflections, disorganizing the furniture, and nailing chairs to the ceiling. This inspires Discord's old chaotic self, and he starts to recorporealize. Once he's back to physical form, he joins in the fun and brings back the singing ginseng tea bags and floating furniture.

Now this is exactly what I was hoping for! 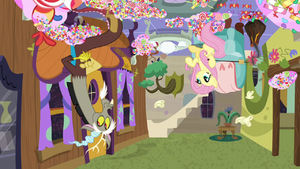 What's discord without a little chaos?

With Discord back to his old self, he throws a proper Chaosville tea party for himself and Fluttershy, replete with sneezing piñatas, singing tea bags, and upside-down sandwich butterfly-catching games.

无序：我已经受你招待这么长时间了。也该轮到我做点什么了。做什么好，做什么好…
Discord: I've been taking advantage of your hospitality for far too long. It's high time I do something about it. What to do, what to do...
无序2：要不你来办下一次茶会？
Discord 2: Why don't you host the next tea party?
无序：我有主意了！要不我来办下一次茶会，在我家？
Discord: I've got it! Why don't I host the next tea party at my place?
无序2：那是我的主意。
Discord 2: Hey, that's my idea.

Pearly Stitch：抱歉，亲爱的。你是在跟我说话吗？
Pearly Stitch: I'm sorry, dearie. Were you talking to me?
无序：其实吧，太太，我是在跟自己说话呢。
Discord: Actually, madam, I'm talking to myself.
无序2：我才不想跟你说话！
Discord 2: Well, I'm not talking to you!

店员：你真的是小蝶的朋友吗？你看起来和她差异巨大。
Shopkeeper Pony: Are you sure you're friends with Fluttershy? You seem so very different from her.
无序：我们当然是朋友！她懂我，但显然你不懂！
Discord: Well, of course we're friends! She gets me, and you obviously do not!

萍琪派：无序？你想的太~~~多了。你只要让小蝶感到舒适就行了。对你来说应该小菜一碟。你那么了解她！
Pinkie Pie: Oh, Discord. You're waaaaaay overthinking things. All you have to do is make Fluttershy feel comfortable. It should be pretty easy for you. You know her so well!

小蝶：你源自纯粹的混沌！变得正常就是在自我毁灭！
Fluttershy: You're a creature of pure chaos! Being normal is destroying you!

小蝶：虽然我们没商量过，但我确信无序讨厌重力！
Fluttershy: We never talked about it, but I'm pretty sure Discord hates gravity!

无序：我只是害怕当你发现你我之间巨大的差异，就不想再和我做朋友了。
Discord: I was afraid that if you saw exactly how different we are, you wouldn't want to be friends anymore.
小蝶：什么？！你怎么会有这种想法？
Fluttershy: What?! Why would you ever think that?
无序：因为你我的关系在其他小马眼中很不合理。
Discord: Because you and I don't make sense to anypony else.
小蝶：这也许是实话，但我就觉得很合理。我原本可想不到苍参茶还能唱歌，结果我遇到了你。你让我见识到了无数的可能性和无数的不可能。而我想表达的是我欣赏你，正是因为你我之间有巨大差异。
Fluttershy: That may be true, but we make sense to me. I never would've thought to make singing ginseng before I met you. But you've opened me up to so many more possibilities and impossibilities. So I guess what I'm trying to say is I like you because you're so different from me.
无序：真的吗？
Discord: You do?
小蝶：当然是真的，笨笨！另外，不来点混沌还叫什么无序啊？
Fluttershy: Of course I do, silly! Besides, what's discord without a little chaos?

无序：你能光临真是太好了。
Discord: It really is nice having you here.
小蝶：我很高兴能来参加。我也很喜欢你的家。因为它太有你的风格了。
Fluttershy: I'm happy to be here. And I really do like your place. Because it's so you.
无序：多谢夸奖，小蝶。
Discord: Why, thank you, Fluttershy. 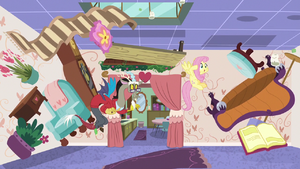