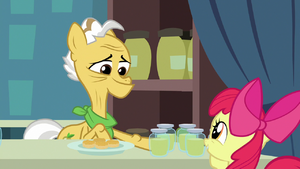 The episode begins with Apple Bloom walking through the busy Ponyville marketplace, where she meets a friendly elderly pony named Grand Pear selling pear jam. Originally from Ponyville himself, Grand Pear says he recently moved back to town from Vanhoover for "a change of pace". He gives Apple Bloom a jar of pear jam—free of charge—and Apple Bloom bids him a fond farewell before leaving.

Back at Sweet Apple Acres, Applejack and Big McIntosh make pancakes for dinner. When Apple Bloom returns with the pear jam to use as a pancake topping, Applejack and Big Mac suddenly panic. They seize the jam jar and hide it under the kitchen floorboards before Granny Smith discovers it. Applejack explains to the confused Apple Bloom that there is a long-standing feud between the Apple family and Pear family, though she and Big Mac admit that they're not sure why. 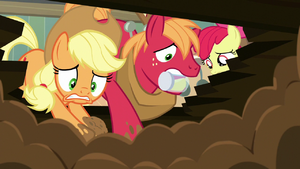 After her friendly encounter with Grand Pear, Apple Bloom wants to know what happened between the Apples and Pears. Because Granny Smith would get upset any time she was asked about it, the Apple siblings decide to ask family historian Goldie Delicious. 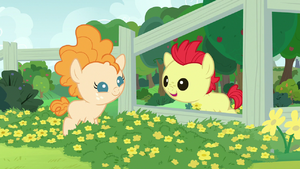 The next morning, Applejack, Apple Bloom, and Big McIntosh travel to Goldie Delicious' cabin and ask her about the feud between the Apples and Pears. Goldie is nervous about going behind Granny Smith's back, but she decides to tell the Apple siblings the story.

Long ago, Sweet Apple Acres was located directly next to the Pear family's pear farm, but the Apple and Pear families were constantly at odds with each other over who were the better farmers, especially Granny Smith and Grand Pear. The only two members of each family to get along were Pear Butter of the Pears and Bright Mac of the Apples—the Apple siblings' mother and father, respectively. 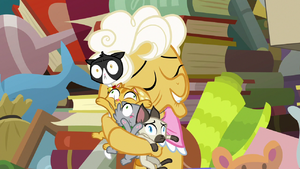 Goldie Delicious explains to the Apple siblings that, despite the heated rivalry between their families, their childhood friendship eventually blossomed into a beautiful romance. However, she is unable to give them more details, so she tells them to talk with firewood salespony Burnt Oak, their father's old friend. 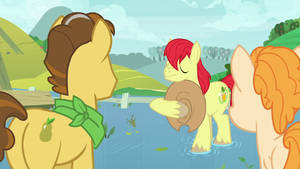 Back in Ponyville, Applejack, Apple Bloom, and Big McIntosh meet with Burnt Oak in the marketplace and ask about their father. In another flashback, Bright Mac and Burnt Oak have a plow race across the apple fields, but Bright Mac gets distracted by Pear Butter in the nearby pear fields and accidentally crashes into a water silo, causing the pear fields to get flooded. Before Grand Pear can blame Pear Butter for this, Bright Mac steps in to take responsibility. After chewing out Bright Mac, Grand Pear takes Pear Butter away from the scene, forbidding his daughter's relationship with the Apple stallion.

In present day, Applejack realizes that she inherited her father's honesty, and Burnt Oak explains that Bright Mac spent the next several weeks repairing the Pear family's water silo and growing closer to Pear Butter. When the Apple siblings ask for more details about their mother, Burnt Oak suggests that they talk to Mrs. Cake, who was friends with Pear Butter when they were young. Just before leaving, Big Mac asks Burnt Oak if it would be okay for them to come by again and listen to more of his stories, and Oak happily obliges. 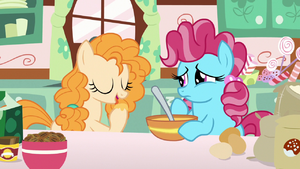 At Sugarcube Corner, Applejack, Apple Bloom, and Big Mac meet with Mrs. Cake and ask about their mother. Mrs. Cake reveals that their mother originally convinced her to pursue baking and helped her get her cutie mark, and Apple Bloom realizes that she inherited her mother's love of helping others find their calling.

In another flashback, Pear Butter helps Mrs. Cake—then named Chiffon Swirl—perfect many of her baking recipes. One day, Chiffon goes to surprise Pear Butter with a thank-you cake, and she finds her having a romantic picnic with Bright Mac in a field between their families' farms. They discover Chiffon hiding in the bushes, and Chiffon promises to keep their relationship a secret. However, Granny Smith wanders by while picking apples and, upon seeing Bright Mac and Pear Butter together, drags her son away. 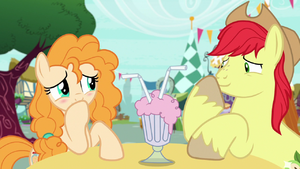 Despite this, the two continue to see each other in secret. On the anniversary of when they first met, Pear Butter sings a soft love ballad on guitar for Bright Mac, and Bright Mac leads her to a spot where he carved their cutie marks into a rock, revealing their strong romantic feelings for one another. Unfortunately, some time later, Grand Pear tells Pear Butter that they're moving away to Vanhoover not only to expand their family's pear business but also to get away from the Apple family.

A heartbroken Pear Butter informs Bright Mac of her father's decision to move the Pears to Vanhoover, being forced to choose family over him. In the present day, before Mrs. Cake tells the Apple siblings any more, she tells them to ask Mayor Mare for the rest of the story. At Ponyville Town Hall, Mayor Mare tells the Apple siblings about the role she played in their parents' love story.

In the last flashback, on the night before the Pear family moves away, Bright Mac organizes a secret wedding ceremony at the edge of Sweet Apple Acres, with Burnt Oak and Chiffon Swirl as witnesses and Mayor Mare as the officiant. He asks Pear Butter to marry him, and she happily accepts. As part of their wedding vows, they plant an apple seed and a pear seed next to each other.

Just as Mayor Mare declares them husband and wife, Grand Pear and Granny Smith discover the ceremony and voice their extreme displeasure. Before Grand Pear can drag Pear Butter away, she says the Apples are her family now, and being forced by her father to choose between being an Apple and being a Pear, she tearfully chooses the Apples. Angered by his daughter's decision, Grand Pear leaves, leaving Pear Butter behind to be comforted by Bright Mac and a sympathetic Granny Smith.

In present day, the Apple siblings are shocked by everything they've heard, and they decide to confront both of their grandparents over this matter. Back at the Ponyville marketplace, Apple Bloom asks Grand Pear about his real reason for coming back to Ponyville. Grand Pear confesses that he wanted to make up for his past mistakes and get to know his estranged grandchildren. Upon hearing this, the Apple siblings hug their grandfather. 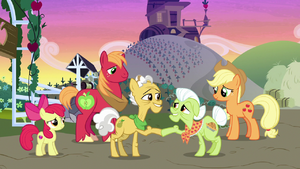 At Sweet Apple Acres, the Apple siblings reunite Granny Smith and Grand Pear. Grand Pear apologizes for leaving, and Granny Smith apologizes for not telling the siblings about their parents sooner. With relations between the Apples and Pears finally mended, the Apple siblings take their grandparents to where Bright Mac and Pear Butter planted their wedding seeds, where a large winding tree of apples and pears now stands.

If anything's gonna make it through, it's apples and pears.

Applejack: [gasps] Pear jam?! What were you thinkin'?!

Goldie Delicious: Now, that's how you make an entrance! Or is it an exit?

Young Granny Smith: Pears are just what happens when you ain't no good at farmin' apples.


Young Grand Pear: Pears are nature's candy. Apples are sour. Like the expression on your face right now.

Applejack: Bright Mac and Buttercup? Those are our parents' names!

Big McIntosh: Uh, would it be okay if we stopped by again sometime to hear more stories?

Mrs. Cake: It was like she knew what I was supposed to do long before I did.


Pear Butter: What? [laughs] That's way longer than we've been together.
Bright Mac: I know, but it's the anniversary of the first time I called you "Buttercup".

Bright Mac: I don't want to be apart from you. Ever. I'm not sure what we'll do, but I'm sure of us. So sure that I'd marry you today.


Pear Butter: I would, too!

Grand Pear: Are you choosin' to be an Apple over being a Pear?!


Apple Bloom: It's in the past, Grand Pear. Oh! Can I call you Grand Pear-Pear?