“有口难开”（英语：Hard to Say Anything）是《我的小马驹：友谊就是魔法》中第七季第8集，总第151集。The title is a reference to the 1989 film Say Anything..., the same basis as Neigh Anything's title and 《我的小马驹：友谊就是魔法》第11期 Hot Topic cover.

Screener's episode listings have erroneously[1][2]listed an untitled episode and this episode as season seven's respective episodes 8[3]and 9.[4]

This episode aired on Canada's Treehouse TV channel on May 13, 2017, two weeks ahead of its scheduled premiere on Discovery Family. 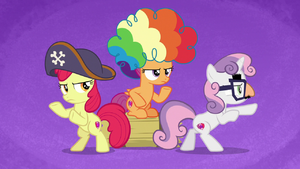 At Sweet Apple Acres, Sweetie Belle and Scootaloo arrive with a box of old costume props left over from Rarity's boutique reorganizing. Meanwhile, Big McIntosh prepares to make a large delivery of apples to Starlight Glimmer's old village. When Apple Bloom points out how often Big Mac has been going to the village lately, he blushes, and the Cutie Mark Crusaders believe he's hiding something. Using the costume props, they disguise themselves and stow away in his delivery cart to find out what he's hiding. 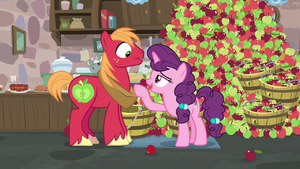 Big McIntosh has a crush on Sugar Belle...

Upon arriving to Starlight's old village, the Crusaders see Big Mac deliver the apples to Sugar Belle; they notice Sugar Belle being particularly flirty and Big Mac giving her longing gazes. Sugar Belle expresses to Big Mac how excited she is to bake apple-flavored treats but needing more shelf space in her bakery to display them. When the Crusaders see how Big Mac acts toward Sugar Belle, they realize he has a crush on her. 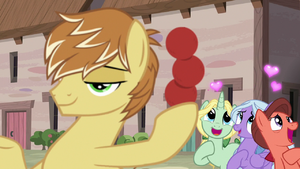 ...but he has stiff competition.

Big Mac is nervous about telling Sugar Belle how he feels, but the Crusaders are sure she feels the same way about him because she orders so many apples just to see him. With the Crusaders' encouragement, Big Mac approaches Sugar Belle with a flower. However, before he can say anything, he gets pushed out of the way by a smooth-tongued stallion named Feather Bangs who also has affection for Sugar Belle.

Realizing he can't compete with Feather Bangs' confidence and smooth talk, Big Mac walks away dejected, but the Crusaders offer to help him win Sugar Belle's heart. Big Mac accepts—as long as the fillies agree not to use any love potions. 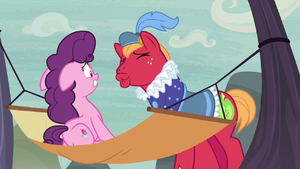 This is several kinds of "wrong".

Sweetie Belle applies her knowledge of fairytale romance stories to help Big McIntosh win Sugar Belle's affections. First, in their "rescuing a damsel in distress" plan, the Crusaders create a scenario in which Big Mac comes to Sugar Belle's rescue when she's in trouble. While in disguise, Scootaloo steals Sugar Belle's saddlebag, and Big Mac tries to stop her. However, Feather Bangs swoops in at the last second and returns Sugar Belle's saddlebag, stealing the glory away from Big Mac.

Next, as part of their "waking a sleeping princess with a magic kiss" plan, the Crusaders push Big Mac to kiss Sugar Belle while she's napping. Unfortunately, Sugar Belle wakes up at the last second, and Feather Bangs appears to whisk her away on a carriage ride. Frustrated, the Crusaders decide to really step up their game. 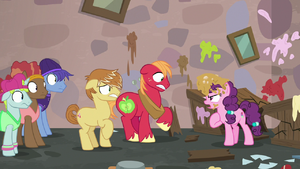 "I wish everypony would just leave me alone!"

In a last-ditch attempt to win Sugar Belle's heart, the Crusaders have Big Mac perform a grand, romantic gesture and sing her a song. In Sugar Belle's bakery, Big Mac sings her a heartfelt country ballad that seems to move her. However, Feather Bangs interrupts yet again with a heavily-autotuned pop song and backup dancers. As Big Mac and Feather Bangs' singing escalates into a musical duel, Sugar Belle gets more and more annoyed. Their efforts eventually result in Sugar Belle's bakery being destroyed, and she angrily tells both of them to leave her alone.

Discouraged by his failure to impress Sugar Belle, Big McIntosh falls into despair. When Sweetie Belle wonders why her fairytale-inspired plans didn't work, Big Mac explains Sugar Belle isn't a fairytale princess—she's a real, kind, and hardworking pony. Apple Bloom suggests abandoning the fairytale plans and doing something that would mean a lot to Sugar Belle personally, and Big Mac gets an idea. 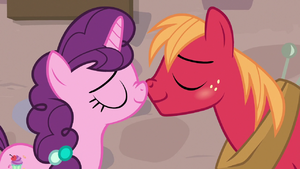 As Scootaloo keeps Sugar Belle distracted in town, Big Mac and Apple Bloom assemble something in her bakery. When Scootaloo is unable to distract Sugar Belle any longer, she returns to her bakery and discovers that Big Mac has built her a new display case to exhibit her baked goods. Sugar Belle immediately starts dreaming about the new desserts she can make, and she thanks Big Mac for his efforts, revealing that she indeed likes him in return. The Cutie Mark Crusaders apologize to Sugar Belle for their meddling, having learned another lesson about letting romance happen naturally. 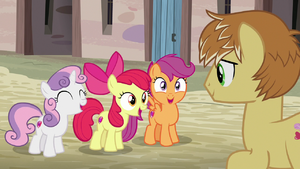 When Feather Bangs returns with one last desperate attempt to win Sugar Belle's heart, the Crusaders tell him he's too late—Sugar Belle has already picked Big Mac to be her "special somepony". Fortunately, he has three other ponies who had been swooning over him during the entire episode. Feather Bangs is nervous about talking to the girls, his earlier bravado just a means to conceal his shyness, and he asks the Crusaders for advice.

The Cutie Mark Crusaders are at your service!

Sweetie Belle: Why don't we just ask him?


Scootaloo: You saw how shifty he was acting earlier. There's no way he'll tell us what he's doing. Plus, I really wanna go undercover. We already have costumes! Call me "Agent Rainbowhead".
Sweetie Belle: I'll be Shimmering Spectacles, a librarian with a mysterious past.
Apple Bloom: And ah'll be a pirate spy! Arrrgh, a spy-rate!
[record scratching]
Apple Bloom: [gasps] Avast! Our ship be leavin' port!
Scootaloo: Huh?


Sweetie Belle: What? How?

Sweetie Belle: Who's that pony?

Sweetie Belle: So nothing fishy's going on.


Scootaloo: No way! We came here to be spies and no spy I know has ever solved a case that quick!
Sweetie Belle: Mmm, how many spies do you know?
Scootaloo: That's... not important.

Feather Bangs: Whoops! Heh heh. These balls are like you. I'll always catch you if you fall.

Sweetie Belle: When I was younger, I read all the fairy tales.


Scootaloo: When you were "younger", huh?
Sweetie Belle: Well, I was younger on the way here! It was a long ride!

Apple Bloom: Sorry it didn't work out with Sugar Belle.


Sweetie Belle: We don't get it. Big, grand gestures always work in the fairy tales.
Big McIntosh: But Sugar Belle's not a fairy tale princess. She's a real pony. She's kind, and she works hard, and she's sweeter than everything in her bakery. 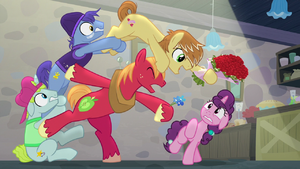