Similarly to Putting Your Hoof Down, this episode was first listed by IMDb, whose The Saddle Row Review listing was "Fault in Our Cutie Marks" and which, similarly to with Flutter Brutter and with Applejack's "Day" Off, credited David Stuart as the voice of "Father Pony", both months before the episode would be announced.[6][7]

Information about the episode was first revealed during a closed-door press event at the 2016 Hasbro Toy Fair.[8]

This episode was to be included in the Shout! Factory DVD My Little Pony Friendship Is Magic: Soarin' Over Equestria but was replaced with On Your Marks.[9]

Bluenote was designed by Charmaine Verhagen.[10] 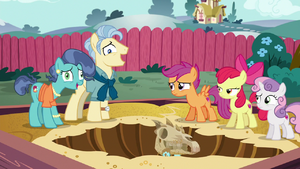 The Crusaders help a mother and father with their daughter's cutie mark. 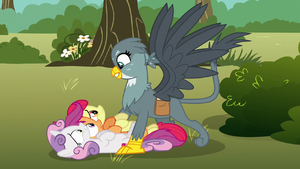 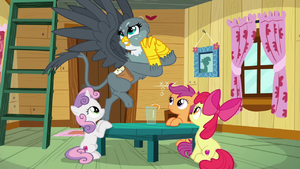 Find the Purpose in Your Life 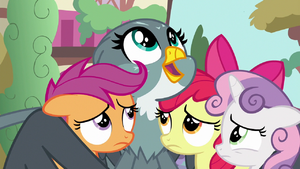 Scootaloo sympathizes with Gabby because of her own difficulties of achieving flight and promises to help her realize her dream of getting a cutie mark, much to Gabby's delight. Using a chart to map out various possibilities for Gabby's purpose, the Crusaders lead her in song as she seeks out other ponies struggling with their own problems.

Gabby demonstrates great aptitude for a variety of activities, but her cutie mark shows no signs of appearing. The Crusaders come to realize that Gabby is good at so many things, singling out her special talent is truly impossible. When they tell Gabby the harsh reality that they she will never get a cutie mark, she flies off in tearful denial. 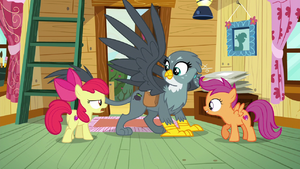 As the Crusaders wallow in their first failure at solving a cutie mark problem, Gabby bursts into the clubhouse and reveals that she earned her cutie mark after all. She shows off her cauldron cutie mark and reasons that, since helping Zecora brew potions was the first thing she tried, that must be her special talent. The Crusaders are elated and decide to tell Twilight the good news. However, Gabby suddenly becomes nervous at this suggestion and promises to meet the Crusaders at Twilight's castle after delivering Rainbow Dash's reply letter to Gilda.

The Crusaders go to the castle to inform Twilight about Gabby's cutie mark, but Twilight tells them that Gabby left them a note before quickly departing. As the Crusaders read Gabby's note aloud, in which she thanks the fillies for helping her earn a cutie mark, Twilight excitedly drops everything to research the first cutie marked griffon in history. Realizing that Gabby broke her promise, the Crusaders become suspicious and go to find her.

The three find Gabby helping Dr. Hooves get his cart out of a mud puddle. When she trips and falls in the mud, her cutie mark is revealed to be fake. Gabby apologizes for lying about getting her cutie mark and admits that she did so to cheer up the Crusaders after they failed to help her. Before she leaves for Griffonstone in shame, Scootaloo gets an idea and tells her to meet them at the clubhouse.

Later at the clubhouse, Gabby wonders that since she cannot get a cutie mark, she may not have a purpose in life. However, the Crusaders tell her that she does have a talent for helping others in need, even the Crusaders themselves. Gabby says that helping others is just something that she enjoys, and the fillies tell her what makes her talent special is what she enjoys doing most, which she doesn't need a cutie mark for. 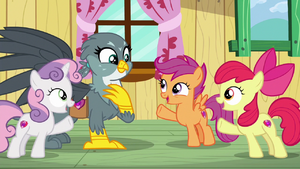 Gabby the griffon: the newest member of the Crusaders.

In recognition of her talent, the Crusaders give her a makeshift cutie mark in the form of two mailbag clips modeled after their own marks. With this, they welcome Gabby as the first griffon member of the Cutie Mark Crusaders.

Some time later, all of Ponyville throws Gabby a cute-ceañera to celebrate her cutie mark. Immensely grateful to the Crusaders for their help, Gabby promises to share what they taught her with the rest of Griffonstone, and the Crusaders tell her to come back soon.

Gabby: The Cutie Mark Crusaders! I can't believe it's really, really you!

Scootaloo: We are kinda awesome and all, but nopony can just give you a cutie mark. It just sort of... happens.
Sweetie Belle: Though I'm pretty sure it doesn't happen to griffons. Or if it does, we've never ever heard of it.
Gabby: Oh. I hadn't thought of that. Sounds like a challenge!

Sweetie Belle: Say, is there some kind of spell you can whip up to make her mark appear?
Twilight Sparkle: Um, I don't know if any of you remember, but using magic to get a cutie mark never really works out all that well.
Cutie Mark Crusaders: Ohhh. Right.

Apple Bloom: Why in tarnation would you promise somethin' that just can't be done?
Scootaloo: I know what it's like to want something that's out of reach. And just because it hasn't happened yet doesn't mean it can't. Maybe trying for the impossible isn't so bad.

Twilight Sparkle: You actually got a griffon a cutie mark for the first time in recorded history?! You know what this calls for? A full-scale research project!

Scootaloo: Gabby, finding your special purpose doesn't have to be about being good at something. It's about feeling good about something inside.
Apple Bloom: And it looks like your destiny is a whole lot like ours – helping others. And you don't need a symbol on your flank to know that. 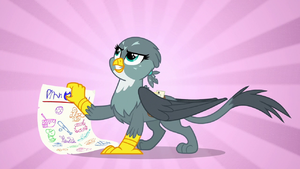 英文原文：The Fault in Our Cutie Marks