Lena Hall recorded her dialogue for this episode on October 27, 2014.[1] The same day, Amy Keating Rogers revealed on Twitter that she wrote the episode.[2]

An animatic clip from the episode was screened at San Diego Comic-Con International on July 10, 2015. The clip features Hall's character and song for the episode.

The episode was released early on YouTube by the channel HasbroEpisodes, eight hours before its scheduled air time.

According to Rogers, several scenes had to be shortened for time such as Svengallop's downfall,[5] in which he is outright fired by Coloratura rather than voluntarily abandoning her.[6]

Some working titles for this episode include "The Fame Game", "Pony Face" (a parody of Lady Gaga's song "Poker Face"), "Glitter and Eat Hay" (a parody of "Glitter and Be Gay" from the Leonard Bernstein operetta Candide), "Ornamentation Complication", "Elation Fixation", and "Pony of Pop".[7]

The song The Magic Inside has been nominated for "Outstanding Original Song" at the 43rd Daytime Emmy Awards.[8] 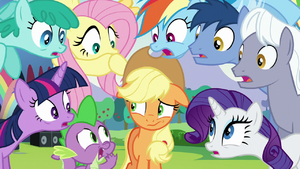 The episode opens with Applejack overseeing the organization of the Helping Hooves Music Festival, with help from her friends. Twilight Sparkle mentions that they have a long list of performers lined up, but thanks to Pinkie Pie, they have managed to book the most popular pop singer in Equestria: Coloratura.

Who in the hay is "Countess Coloratura"? 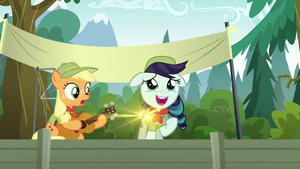 籁籁心怀无限热情演唱《Equestria, the Land I Love》

Though Applejack doesn't know who Countess Coloratura is, she remembers befriending a pony named Coloratura at Camp Friendship when she was a filly. As fellow campers, the two were close and performed together in a talent show, and Applejack knew Coloratura by the nickname "Rara". Even though they eventually lost touch, Applejack remembers Coloratura as a kind pony and dismisses the idea of her becoming a demanding diva.

When Countess Coloratura arrives in an extravagant manner, Applejack tries to approach her, but her manager Svengallop's intervention causes her to act aloof and pompous. Svengallop demonstrates his exceedingly high standards further in his interactions with Pinkie Pie when he judges the festival preparations.

Applejack confides in Rarity that she hardly recognizes the pony she once knew, but Rarity insists she'll change her mind once she sees Countess Coloratura perform. 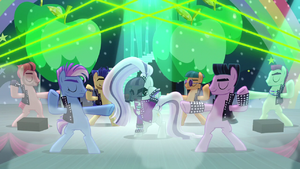 In her rehearsal for the Music Festival, Countess Coloratura performs a techno-pop song with backup dancers and strobe lights. Her spectacle is met with mostly positive reception, but Applejack finds it too flashy, and all of Svengallop's praise is toward the "bells and whistles" rather than Coloratura's singing.

When a meet-and-greet with school foals is next on Coloratura's schedule, Svengallop suggests skipping it, but Coloratura refuses, saying that meeting school ponies is her favorite part of any event. Coloratura happily meets the foals of Ponyville and announces a contest in which the winners will sing on stage with her during the festival. Applejack is pleased that a glimmer of her old friend still remains. 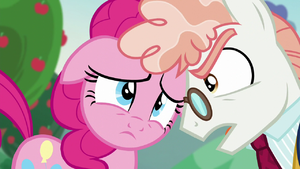 Meanwhile, Svengallop meets with Pinkie Pie and piles more hard-to-meet demands upon her, threatening to pull Coloratura out of the festival if his demands are not met. Applejack overhears and brings it to Coloratura's attention. Coloratura is in disbelief at Applejack's accusations toward Svengallop, and she thinks Applejack is simply jealous of her fame. The two have a heated argument, after which Coloratura renounces her childhood nickname. 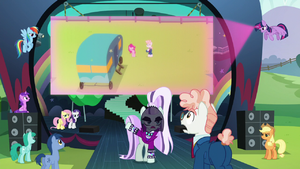 As Applejack helps Pinkie Pie meet Svengallop's demands, she tries to think of a way to convince Coloratura that her manager is manipulating her. She approaches Coloratura once more and asks for a chance to prove her accusations.

During the festival's final preparations, Coloratura talks with Svengallop and considers cancelling the contest with the school foals. Svengallop is delighted to hear this, finding the contest to be "pointless". As he meets with Pinkie Pie again to make some show adjustments, Twilight spies on them backstage. Svengallop tells Pinkie to cancel the school foals contest, callously referring to them as "brats" and once again threatening to pull Coloratura from the festival if Pinkie does not deliver.

When Svengallop returns to the stage, Twilight magically broadcasts a recording of his conversation with Pinkie Pie to the crowd, and Svengallop is exposed. Confronted by a furious Coloratura, Svengallop angrily leaves her to her own devices.

That evening, without a manager for guidance, Coloratura is incredibly nervous about her performance. Applejack tells her that Svengallop was only promoting a false persona and using her to enjoy the perks of stardom, but a true perk of friendship is being able to be true to oneself.

Twilight welcomes Countess Coloratura to the stage, and as the curtains open, Coloratura appears without the veil and makeup that were signature of her stage persona. With a piano and backup orchestra, "Rara" sings a heartfelt song that brings both herself and Applejack to tears. Her performance is met with overwhelming applause.

In a show of her gratitude to Applejack for reminding her who she is, Coloratura invites the Cutie Mark Crusaders to the stage to sing a reprise of the song she and Applejack wrote together years before.

Applejack: Who in the hay is Countess Coloratura?

Svengallop: Did I not tell you to provide straws in all of Countess Coloratura's beverages?


Pinkie Pie: Uh, I don't think so. But lucky for you I have the biggest straw collection in Equestria! I call this straw Fernando.

Rarity: Trust me. Once you see Countess Coloratura perform, you simply won't believe it!

Applejack: Rarity was right! I don't believe it.

Countess Coloratura: Is this the little sister you wrote to me about, AJ?

Svengallop: Cancel the contest for the fillies and schedule me a spa treatment! Now that I don't have to oversee a rehearsal with those brats, I have time for the works! You know the drill! Deliver, or the diva ditches your dippy charity!

Applejack: Now, why's it gonna be so terrible?


Coloratura: Because Svengallop was in charge of everything! The lights, the visuals, the sound! Without Svengallop, I have nothing!
Applejack: Now now, don't go gettin' yourself into a tizzy there, Rara. Svengallop turned you into Countess Coloratura, and acted like your friend so he could enjoy the perks that came with bein' a star! But the real perk of friendship is gettin' to see your friend bein' true to theirself! And Rara, when you're simply yourself, you're the brightest star I've ever seen shine.

Coloratura: This song may be familiar, but yet, it's totally different. Kind of like me, Rara. 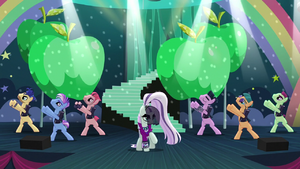