She briefly overhears the six friends bickering and questions if their friendship is ending. She is later confused when she finds that the six have made peace and takes a keen interest in how they can remain friends despite their differences. Realizing she is being watched, she and two other ponies who share her curiosity—Party Favor and Night Glider—meet the Mane Six in private and express their desire to have their old cutie marks again. They inform the six about the vault in which their marks are kept, inadvertently leading them into a trap laid by Starlight Glimmer. 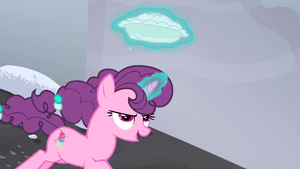 In The Cutie Map - Part 2, when Fluttershy appears to convert to the town's ways, Starlight Glimmer asks her to identify the ponies who told the Mane Six about the vault. Party Favor takes the blame for Sugar Belle and Night Glider, protecting them from punishment.

Later, Fluttershy exposes to the villagers that Starlight still has her original cutie mark. Realizing she and the others have been deceived, Sugar Belle reclaims her old cutie mark and helps the Mane Six recover their marks from Starlight alongside Party Favor, Night Glider, and Double Diamond. During the pursuit, Sugar Belle creates pies from snow to throw at Starlight. After Starlight escapes, Sugar Belle remains at the village with the other ponies, excited to bake delicious recipes again.

She is seen again at the end of The Cutie Re-Mark - Part 2, where she and the other ponies at the village are shown forgiving Starlight for her actions. In To Where and Back Again - Part 1, Sugar Belle appears among her fellow villagers celebrating the town's Sunset Festival. She also appears at the end of Part 2.

In season seven, Sugar Belle appears at Starlight's graduation ceremony in Celestial Advice and in a flashback in Rock Solid Friendship.

A romance as sweet as apple pie.

In Hard to Say Anything, Sugar Belle appears as the object of affection for both Big McIntosh and another stallion named Feather Bangs. Where Big Mac attempts to win Sugar Belle's heart through apple deliveries and fairy tale-inspired approaches, Feather Bangs does so with his swagger and smooth talk. After a heated musical battle between Big Mac and Feather Bangs results in damage to her bakery, Sugar Belle rejects both of them.

With the help of the Cutie Mark Crusaders, Big Mac eventually wins Sugar Belle's heart by repairing the damage to her bakery and building a new, much larger display case for her desserts. Sugar Belle reveals that she likes Big Mac as well, and they begin a romantic relationship.

In It Isn't the Mane Thing About You, Sugar Belle makes a brief cameo appearance walking with Big Mac at Sweet Apple Acres.

Sugar Belle is a character in Gameloft's mobile game, and was added in the Version 2.5 update on September 24, 2015 (for iOS) and September 30, 2015 (for Android). Her in-game description states "Sugar Belle's a unicorn who's brilliant at baking! ... After she got her cutie mark, anyway. Without it, Pinkie Pie thinks her baking tastes worse than cardboard..." 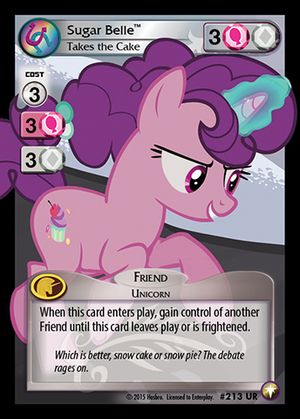 Sugar Belle appears on an Enterplay trading card series 3 binder.[1]In the Equestrian Odysseys expansion set of Enterplay's collectible card game, card #213 UR is of Sugar Belle. In the High Magic expansion set, card #34 C of Sugar Belle lists the quote "Pies, cookies, and cupcakes all have one thing in common: the first time you bite into one when they're still warm from the oven, you never forget it!"

Is your friendship ending?

My name is Sugar Belle. What can I bring you? We have: muffins...

Different talents lead to different opinions, which lead to bitterness and misery.

You can't have a cutie mark, Starlight! Either we're all equal, or none of us are!

I finally have a chance to bake something besides terrible muffins!

All I used to bake were boring old muffins, but thanks to your apple deliveries, I get to bake all kinds of delicious treats! Apple pies, apple fritters, apple turnovers, caramel apples, caramel apple cakes... [sighs] I just wish I had more room to display it all. My shelves only hold so much.

—— Hard to Say Anything

What in Equestria has gotten into you two?! If you think I'm the kind of pony that likes all this nonsense, then you clearly don't know me at all! I wish everypony would just... leave me alone!

—— To Big McIntosh and Feather Bangs, Hard to Say Anything

Now I have twice as much room for all my desserts! [gasps] Which means... I can make even more! I've been dying to try baking cream pies and whoopie pies and icebox cakes and, of course, more apple treats!

—— Hard to Say Anything

—— To Big McIntosh, Hard to Say Anything

Pies, cookies, and cupcakes all have one thing in common: the first time you bite into one when they're still warm from the oven, you never forget it!