In the episode The Last Roundup, Applejack offers her prize money from the rodeo in Canterlot to help fix the Ponyville town hall, which Mayor Mare presses her about before she leaves on the train.

In The Super Speedy Cider Squeezy 6000, ponies use bits to buy cider from the Apple family. In this episode cents are also mentioned as currency.

In the opening of Magic Duel, a cloaked Trixie presents a large bag full of bits to a curio shopkeeper in order to purchase the Alicorn Amulet. After seeing the money, the shopkeeper does not hesitate to sell the amulet to her despite earlier describing it as "far too dangerous".

In the opening of Sleepless in Ponyville, Rainbow Dash is seen holding two bits before flying off-screen. She returns in a later shot with a drink.

In Daring Don't, Dr. Caballeron steals a magical ring from Daring Do in the hopes of selling it to her greater nemesis Ahuizotl. Later in the episode, Daring Do disguises herself and attempts to "buy" the ring back from Dr. Caballeron with a large bag of bits. Dr. Caballeron initially complies to this trade before a furious Ahuizotl appears for the ring, and Caballeron drops the ring and runs away with the bag.

During Glass of Water in Three's A Crowd, Discord wishes on the well from The Mysterious Mare Do Well using a bit that bears his likeness.

Bits are prominently featured in Leap of Faith as Flim and Flam continuously swindle money from physically suffering ponies, selling them a fraudulent curative tonic. At the end of the episode, Applejack receives a bit from Silver Shill, in turn received from Neon Lights; this special bit is one of the key items behind unlocking the Chest of Harmony, as visually hinted later in the episode and physically confirmed in Twilight's Kingdom - Part 1. This bit is depicted differently from others, being a hoof-sized gold coin rather than a smaller gold piece as seen elsewhere.

In The Lost Treasure of Griffonstone, griffons are shown to use bits as currency like ponies do, and are said to have greedily hoarded bits since ancient times. Pinkie Pie and Rainbow Dash bring several bits with them during their visit to Griffonstone at Twilight Sparkle's recommendation that griffons always help those who share their wealth. On the train ride to Griffonstone, Pinkie wastes an entire bag full of bits on a cart of candy from a conductor. Whenever the ponies feel disappointed by the griffons' services, they are usually met with the response, "No refunds." One griffon shopkeeper in particular proves to be obsessed with bits to the point that she leaves Rainbow injured on a perilous ledge deep in a ravine when the Pegasus is unable to pay for her help, and she only offers to tell whether griffons only talk about bits in exchange for more bits.

In Viva Las Pegasus, bits are used by the customers of Gladmane's casino.

In A Royal Problem, bits appear in a dream of Flim and Flam.

In Discordant Harmony, Discord materializes large amounts of bits out of thin air to pay for tea party supplies from a teashop salespony, a judgy clerk pony, and Cherry Fizzy。其中，在茶店里，无序使用了一张紫色的纸币。​[​未确定 – 有待商榷‍​]​

In The Perfect Pear, ponies are seen paying bits for both Granny Smith's apples and Grand Pear's pears.

In Once Upon a Zeppelin, Iron WIll's parachute has a picture of him in a pile of bits.

In Fake It 'Til You Make It, customers at Rarity For You pay bits for the clothes there.

In Friendship University, Flim and Flam have an entire mountain of bits appropriated from their students. They are later forced to return all of them.

In The Point of No Return, Twilight pays twenty-eight bits in late fees for an overdue library book.

In a deleted scene in My Little Pony Equestria Girls: Friendship Games, Twilight attempts to pay for her bill at the Sweet Shoppe with Equestrian bits.

Cover D of Issue #1 depicts Apple Bloom holding on to a bunch of balloons next to a sign reading, "Balloons", "2 bits", and "Will trade for Cutie Mark".

Larry's Comics and Jetpack Comics exclusive covers RE of Issue #5 depict Pound Cake and Pumpkin Cake Equestria postage stamps each denominated with the value of 5 bits.

In the Issue #9 story Zen and the Art of Gazebo Repair, a coupon for 5 bits off is shown, and at the Summer Wrap-Up Festival and Hoedown, bits come up multiple times: Leadwing offers caricatures for 5 bits, Big McIntosh wins 5 bits at horseshoes at a horse shoe toss then breaks a bell and pays 10 bits, Sweet Cream Scoops[原文如此 ] offers kisses for 1 bit and has numerous gold bits behind her, and Diamond Tiara and Silver Spoon offer advice for 5 bits.

In the Issue #10 story Zen and the Art of Gazebo Repair - Part Deux "If You Only Have a Hammer, You See Every Problem as a Nail", a sign on a ball toss booth at the Summer Wrap-Up Festival and Hoedown reads, "Guess your weight age or sex" and "Only 1 bit!", Spike sells a custom pony figure of Big McIntosh to Big McIntosh for a small bag containing bits and has collected numerous bits and bit bags, and a cash register at Photo Finish's "De Magicks of Photography" photo stand displays "$500", and in the Issue #10 back-up A page from the scrapbook of Big Mac, Diamond Tiara and Silver Spoon advise Hayseed Turnip Truck for 2 bits.

On the 《我的小马驹：友谊就是魔法》第12期 1 million cover A, the back cover of Shining Armor's comic book depicts advertisements inviting foals to spend their bits on novelty items.

In the Issue #3 story How Rarity Got Her Groovy Back, Rarity's branding of Flax Seed and Wheat Grass's "Goops for Stuff" spiritual enhancers as beauty products includes raising the price of the milk and honey bath from 4 bits to 80 bits a bottle with new, all-recycled material packaging.

In the Issue #5 story, Twilight Sparkle pays a shopkeeper pony four gold bits for some produce.

In Twilight Sparkle and the Crystal Heart Spell chapter 13, "PFF to the Rescue", Gilda the Griffon sells tickets to see Trixie for the price of three bits each.

In Rainbow Dash and the Daring Do Double Dare.​[​详列​]​

In Rarity and the Curious Case of Charity.​[​详列​]​

In Daring Do and the Marked Thief of Marapore.​[​详列​]​

In Daring Do and the Eternal Flower.​[​详列​]​

In Daring Do and the Forbidden City of Clouds.​[​详列​]​

In Discord and the Ponyville Players Dramarama.​[​详列​]​

In Trixie and the Razzle-Dazzle Ruse.​[​详列​]​ 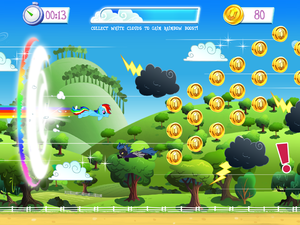 In Gameloft's mobile game, one of the currencies available is bits. They are obtainable after completing objectives, playing mini-games, producing items, and leveling up. The game's description of Rare Find mentions that "he found 20 bits on the road early this week!"

In Enterplay's collectible card game, α #151 R, Two Bits, shows gold bits as in The Super Speedy Cider Squeezy 6000 and attributes to Barber Groomsby the quote "Shave and a mane cut, two bits!", referencing the famous couplet "Shave and a Haircut". For the game's expansion set Absolute Discord, digital Everypony Gets One lists the quote "And you too can have a brand new Princess Twilight Sparkle, for the low, low cost of just 0 bits!"[1][2]

The fan-designed WeLoveFine T-shirt "Delivery!" depicts a postage stamp denominated with the value of 2 bits.