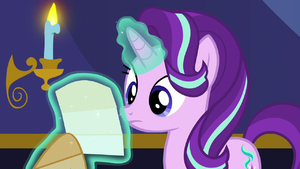 他们要邀请我参加今年的黄昏节！
They've invited me to the annual Sunset Festival! 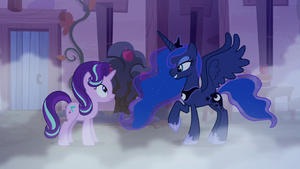 The next day, Starlight travels to her old village, where Double Diamond, Party Favor, Night Glider, Sugar Belle, and the other villagers have decorated for the Sunset Festival. When Starlight greets them, they cruelly turn her away and tear up her festival invitation. As the villagers start to laugh at her, Starlight shuts her eyes. When she reopens them, day has turned to night, and everyone around her has vanished. Just then, Princess Luna appears through the fog and reveals that Starlight is only having a dream.

Realizing she is more nervous about the festival than she thought, Starlight asks Luna what she should do. Luna tells Starlight that the Mane Six have helped her time and time again and suggests that she share her concerns with them. 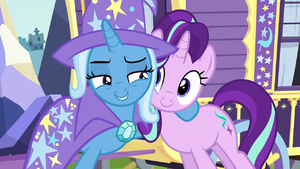 When in doubt, count on a great and powerful friend.

The next morning, the Mane Six and Spike are gathered in the castle throne room, and Starlight confides in them her worries about going to the Sunset Festival, questioning how much they have truly forgiven her and how much she has really changed. The ponies assure Starlight that she has changed for the better and that she would not have been invited to the Sunset Festival if the villagers did not believe the same. 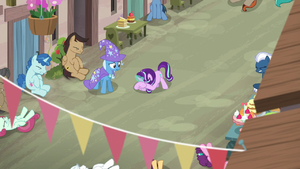 Starlight fears falling back into her old leadership role.

Some time later, Starlight and Trixie arrive on the outskirts of Starlight's old village. Starlight hopes to enjoy the festival without attracting too much attention, and Trixie promises to drag her out of there if she gets too uncomfortable. As they enter the town, the villagers greet Starlight much more positively than they did in her nightmare. However, they quickly overwhelm her with questions about where she is living and how long she will be staying.

Surrounded by ponies on all sides, the panicked Starlight pushes them away with a magical force field and cowers to the ground in fear. Recognizing her friend's discomfort, Trixie spirits them away from the town with a smoke bomb. As they return to Ponyville, Starlight feels ashamed about how she left, but Trixie tells her that everyone makes mistakes—even Trixie herself. 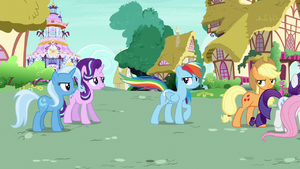 Something's rotten in the town of Ponyville...

Back in Ponyville, Starlight Glimmer meets up with some of her friends, but she notices them acting strangely: Pinkie Pie does not know Starlight's name or where she went, Applejack and Rarity laugh at her misfortune, and Rainbow Dash and Fluttershy whisper to the others in secret. When she goes to speak to Twilight about it at the castle, Spike almost refuses her entry, and when she explains to Twilight what happened at the village, Twilight advises her to "cut her losses" and never go back there. Starlight is considerably surprised to hear such advice from the princess of friendship.

That night, Starlight Glimmer has another dream about her old village. The villagers she encounters all ignore her, and Twilight appears with her friends to harshly scold Starlight for disobeying her orders. As Starlight senses there is something wrong, the Mane Six vanish into thin air. Princess Luna appears out of the moon, but something appears to hold her back. She informs Starlight Glimmer that the changelings have returned and captured her and Princess Celestia. She tells Starlight to find help but to also be careful of who she trusts. As Luna is detained by the changelings, Starlight is forcibly awakened from her dream. 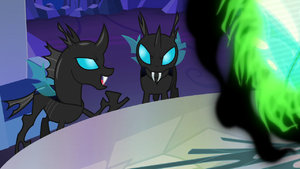 Changelings take control of the Castle of Friendship.

Starlight sneaks out of the castle and goes to wake up Trixie in her nearby cart. After determining that Trixie is not a changeling herself, Starlight brings her up to speed on the situation. They sneak back to the castle and find the Mane Six and Spike—changelings in disguise—in the throne room using a magical scarab beetle array to communicate with Queen Chrysalis. The changeling drones report to their queen they have taken the Mane Six's places and seized control of the castle. Chrysalis reports that Celestia and Luna have also been replaced in Canterlot.

Having thought too small the last time she attempted to take over Equestria, Chrysalis has organized a systematic capture of all of the most important ponies in the land, leaving no one left to stop the changelings from taking over. When their communication ends, Starlight nearly gives herself and Trixie away with a creak in the throne room doorway, but they avoid being discovered with Starlight's invisibility spell. Starlight teleports herself and Trixie back to Trixie's wagon, and Trixie feels unqualified to deal with such a situation as a changeling invasion. With Twilight, Celestia, and Luna captured, Starlight suggests seeking the help of Princess Cadance and Shining Armor in the Crystal Empire, but Thorax appears to inform them that Cadance, Shining Armor, and Flurry Heart have all been taken prisoner as well.

Trixie and Thorax look to Starlight Glimmer for guidance, but Starlight is unsure of what to do. As they are certain there is no one around with powerful magic to help them, Discord appears.

这不正是配角的自我修养嘛？
Well, isn't this quite the combination of secondary characters? 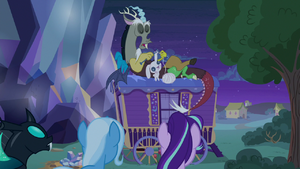 With Discord, Starlight's "unlikely team of heroes" is complete.

After determining that Discord isn't a changeling, Starlight informs him that the Mane Six and all of the royals of Equestria have been taken prisoner. Discord is furious to learn that Fluttershy has been taken, and he transports the four of them to the outskirts of the Changeling Kingdom, where Queen Chrysalis' castle lies.

星光熠熠：我的信？谁会给我写信呢？是…我原来村子里的小马写的！
Starlight Glimmer: For me? Who'd be sending me a letter? It's... the ponies from my old village.
暮光闪闪：他们有危险吗？
Twilight Sparkle: Are they in danger?
斯派克：他们在生你的气吗？
Spike: Are they upset with you?
星光熠熠：不…更惨！他们要邀请我参加今年的黄昏节！
Starlight Glimmer: No... It's worse! They've invited me to the annual Sunset Festival!

云宝黛茜：相信我，你已经大不一样了。毕竟，你以前可是坏透了。
Rainbow Dash: Trust me. You are a totally different pony now. I mean, you were pretty awful.
苹果杰克：云宝黛茜！
Applejack: Rainbow Dash!
云宝黛茜：啥？实话实说！我是在表扬她！
Rainbow Dash: What? She was! It's a compliment!

萍琪派：再说收到派对邀请，却不去？！这简直是…简直是…我也不知道怎么说，但肯定是不对的。
Pinkie Pie: And getting an invitation to a party and not going?! That's like... I-It's like...! Well, I don't know what it's like, but it is definitely bad.

星光熠熠：你能答应真是太感谢了，崔克茜。暮暮说我该带个朋友去，我第一个想到的就是你。
Starlight Glimmer: Thanks so much for doing this, Trixie. When Twilight said I should bring a friend, you were the first pony I thought of.
崔克茜：好主意啊，暮光公主。让我这个 — 星光最好的朋友 — 助她走完这段艰难旅程，你这公主当得还真是英明啊。
Trixie: Great idea, Princess Twilight. Asking me – Starlight's best friend – to help her on this difficult journey really shows how wise a princess you have really become.
暮光闪闪：[咬牙切齿地] 谢谢，崔克茜。[轻声对斯派克] 我刚才指的我自己。
Twilight Sparkle: [through gritted teeth] Thanks, Trixie. [hushed, to Spike] I was talking about me.

崔克茜：不许把这句话传出去，就算是崔克茜也犯过错误。
Trixie: Don't you ever tell another pony I said this, but even Trixie's made mistakes.

无序：这不正是配角的自我修养嘛？
Discord: Well, isn't this quite the combination of secondary characters?

星光熠熠：邪茧和幻形灵回来了，他们把全国最厉害的小马都绑架了！塞拉斯蒂娅、露娜、韵律、银甲、雪儿，还有暮暮和她的朋友们。我们得——
Starlight Glimmer: Chrysalis and the changelings are back. They've ponynapped all of the most powerful ponies in Equestria! Celestia, Luna, Cadance, Shining Armor, Flurry Heart, Twilight and her friends. We need to—
[清除魔法]
[magic zap]
无序：[轻声] 他们抓走了小蝶？
Discord: [hushed] They took Fluttershy? 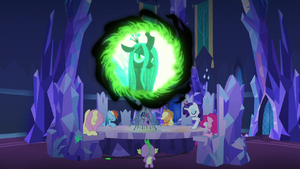 英文原文：To Where and Back Again - Part 1