“龙马奇团”（英语：Dungeons & Discords，亦称Dungeons and Discords[1]）是《我的小马驹：友谊就是魔法》中第六季第17集，总第134集。The title is a reference to Hasbro's Wizards of the Coast tabletop role-playing game Dungeons & Dragons, which has been partnered with through merchandise[2][3]and has had two in-universe counterparts—Oubliettes & Ogres and Dragons & Dragons—introduced in the IDW comics.

"BOYS’ NIGHT!!!!!" was the title of this episode's submitted premise by Nick Confalone,[4]who also pitched this episode's final title[5]and "insisted on the ampersand vs 'and'".[6]

In production order, this is season six episode eighteen.

The "RPG elements" featured in the episode were designed by Matt Herring.[14]The fantasy backgrounds were designed by Laura Bifano.[15]The Ogres & Oubliettes character cards were drawn by Charmaine Verhagen.[16]

At least Rainbow Dash's role-playing appearance and a staff were previewed with merchandise.[2][3][17]​[​详列​]​

The chapter book Starlight Glimmer and the Secret Suite—previewable more than a month earlier than but released three days after this episode's premiere—alludes to the episode in chapter 9, "Snack Attack". 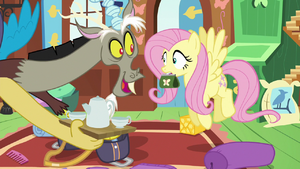 Discord returns after being away for over half a season.

The episode begins with Fluttershy packing her bags for a trip away from Ponyville. Discord appears and believes that she has planned a tropical vacation for the two of them, but Fluttershy explains that she is accompanying her friends on an overnight goodwill tour of Yakyakistan. When Discord expresses disappointment over Fluttershy's sudden departure, she suggests that he join Spike and Big McIntosh in a "top secret" activity that they do whenever the Mane Six leave town.

Discord dismisses the notion of spending an evening with two "sidekicks", but Fluttershy says it would be a good opportunity for him to expand his circle of friends. Discord is still dismissive, but he takes it under consideration.

Just the three of us Discord gets left behind with the "sidekicks".

At the Ponyville train station, Discord's attempts to convince Fluttershy not to leave end in failure. The rest of the Mane Six soon arrive, and Spike and Big McIntosh see them off as they leave on the Friendship Express. In Spike and Big Mac's company, Discord becomes awkwardly uncomfortable. When they approach him, he tries to back away until they invite him to join their "Guys' Night". Discord is intrigued by the idea of an evening of zoot suits and swing dancing and accepts their invitation. Spike tells him to meet them at Twilight's castle at sundown.

That evening, Spike and Big Mac are excited to begin their Guys' Night, and Discord makes a considerably flashy entrance. He expects a night of partying at Ponyville's rowdiest establishments, but Spike says they are staying in and playing games. Still excited, Discord suggests pony charades, but Spike and Big McIntosh instead sit down to play a game of Ogres & Oubliettes, much to Discord's horror.

Spike explains that 《Ogres & Oubliettes》 is a tabletop role-playing game in which players create their own fantasy avatars and take part in an imaginary adventure where decisions and outcomes are determined by dice rolls. During Spike's explanation, Discord affords only the barest of interest. 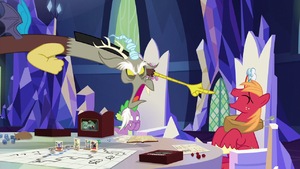 I cast Magic Missile on you!

In the game, Spike is a wizard named "Garbunkle", and Big Mac is a unicorn knight named "Sir McBiggun". Their objective is to rescue "Princess Shmarity" from the evil Squizard. In creating his own character, Discord disinterestedly chooses an archer named "Captain Wuzz". The game gets underway, and Discord immediately makes several unsuccessful decisions—mainly due to his lack of interest—and earns penalties to his character and imaginary ridicule. Angered by Spike and Big McIntosh's laughing, Discord seals Big Mac in a magic bubble and decides to show the two a real Guys' Night.

Discord snaps his fingers and creates a swing jazz dance club, offering milkshakes and card games to Spike and Big Mac. However, Spike and Big Mac want to go back to playing Ogres & Oubliettes, and Spike proposes that Discord sit and watch if he does not want to play. Offended, Discord agrees to return to the game – by transporting Spike and Big Mac into the game itself. In the game world of Ogres & Oubliettes, Spike and Big Mac take on the appearances and abilities of their character avatars. However, the dangers they face are now completely real, and Discord is in control of everything that happens. The evil Squizard and his forces—appearing as living cardboard drawings—arrive to attack Spike and Big Mac. Spike and Big Mac run away, and after briefly shielding themselves from a barrage of arrows, they take shelter in a cave.

Discord appears before them, and Spike angrily chews him out for ruining his and Big Mac's game. When Discord asks why they invited him to join them in the first place, Spike reveals it is because they felt sorry for him. Discord promptly transports the three back to the castle throne room. Spike explains further that Fluttershy told them about his behavior before she left, and they invited him to join them out of courtesy. This could have gone better.

Discord is mortified to discover that he is not as "cool" and respected as he initially thought he was, and he decides to leave while playing off his embarrassment. Spike and Big Mac return to their game but are unable to focus due to the circumstances of Discord's departure. They call Discord back to give him another chance, and Discord returns in an instant. He apologizes for ruining their evening, and Spike and Big Mac admit that the game was exciting when Discord made it real. They ask him to make a toned-down version of the Ogres & Oubliettes world, and he happily obliges. Some time later, the Mane Six return from their trip to Yakyakistan and go to the Castle of Friendship, where they find Spike, Big Mac, and Discord playing a real-life version of Ogres & Oubliettes. As they celebrate their victory over the Squizard, Fluttershy is pleased that Discord had made new friends.

Twilight suggests they excuse themselves while the boys finish playing their game, but Rainbow Dash and Pinkie Pie decide to join in the fun. Upon entering the game world, Rainbow and Pinkie take on their own fantasy character avatars and team up with Spike, Big Mac, and Discord against the Squizard's skeleton hordes.

Fluttershy: If you're looking for something to do, you could spend the evening with Spike and Big Mac.

[beat] Pinkie Pie: Did I forget to mention there's a pony-eating yeti on Frost Field Glacier?

Discord: [high-pitched] Announcing the much anticipated arrival of the spirit of chaos and disharmony, the purveyor of pandemonium, lord of lawlessness, earl of turmoil, bringer of bedlam... [imitating fanfare] Discord!

Spike: In a world where evil reigns supreme, a small band of warriors stands tall against the darkness. This is... Ogres & Oubliettes!

Spike: It's your turn first. What do you wanna do?

Discord: Curse myself for attending this infernal evening?

Discord: Farewell, Garbunkle the magician and brave Sir McBiggun. May providence smile upon thee in thy quest to rid Spiketopia of the dreaded Squizard... [sighs] When I say it that way, the game doesn't sound half bad.

Spike: What? Discord: I'm ssssssss— Spike: Can't hear you. Big McIntosh: Nope. Discord: I'm trying to say I'm sorry, all right?! I'm sorry for ruining your game, and I'm sorry that I thought I was better than you! [pants] [quickly] Now let's play before this evening gets any sappier, shall we?

Twilight Sparkle: We should just close the door and let them finish... whatever this... is.

Rainbow Dash: No way! Did you see Big Mac's sword? I totally want in! Pinkie Pie: Yeah! I don't know what it is, but it looks like super duper fun!