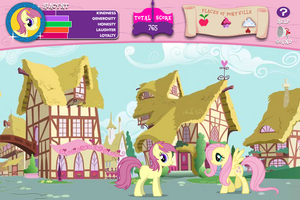 My Little Pony Friendship is Magic: Adventures in Ponyville是一个出于宣传目的而制作的Flash游戏，曾可以在Discovery Family日间节目网站上访问。玩家可以创建自己的小马角色并在小马镇与剧集中的角色相见。游戏的目标是发现自己角色的可爱标记的意义。

There are two types of resource: Friendship Sparkles and Points. Friendship Sparkles can be earned for playing in minigames and helping other ponies solve their relationship problems. Every sparkle increases one of the Elements of Friendship: Kindness, Generosity, Honesty, Laughter, or Loyalty. Once all are maxed out, the pony earns her cutie mark. Winning one game unlocks the Pegasus pony in the Pony Creator; while winning two games unlocks the unicorn.

Points can be earned for beating the minigames. Points unlock new content in the Pony Creator. Sparkle Bonuses can be earned by clicking repeatedly on a pony. By earning your cutie mark you can unlock new ponies.

However, all four games have had their gameplay slightly altered. The three minigames use the same difficulty markers that would later be used in the Bridle Gossip Puzzle game, and all three minigames feature a 'stop' button which halts gameplay and returns the player to the difficulty selection screen. The Pony Creator is represented as a Rarity game, and your pony is inserted into a recreated scene from the show.

The standalone versions of the minigames instead of building towards earning Friendship Sparkles build towards an eventual game end, where the player is presented with another 'stop' button and a button to restart the game. As the standalone Pony Creator is separate from the standalone minigames, the player-controlled ponies that appear in the original three minigames are randomized.

A heavily modified standalone version of the Rainbow Dash minigame, based on A Canterlot Wedding - Part 2, became available on April 2, 2012, under the title Rainbow Dash's Rainboom Game. The objective is for Rainbow Dash to pick up enough speed to create a sonic rainboom to decorate the sky that is specified in the original version to be after the wedding ceremony of Princess Cadance and Shining Armor, while avoiding clouds, birds, parasprites, and Tank. It uses music from The Perfect Stallion. 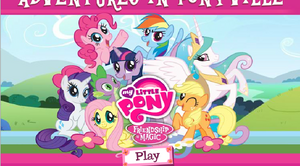